Our sexual health services are discreet and confidential.
Depending on if you are currently experiencing symptoms or not, will depend if you appointment is with a nurse or a doctor.

HIV (human immunodeficiency virus) is probably the most well-known STI. When the virus first became known to the world, the risk of death was incredibly high and it was very scary. But now, thanks to incredible scientific research, HIV is completely manageable and most people will live a completely normal life with the help of medication. Early detection and treatment is crucial to stopping the spread and managing the effects of the virus. The only way to know if you have contracted the virus is to get tested.

We understand that testing for HIV can be daunting but it is important to not delay testing due to fear. Our team of highly experienced and friendly doctors and nurses are on hand to talk through your concerns, guide you through testing and treatment options and are there for all on-going care. All our sexual health services are discrete and completely confidential.

We have a number of different tests available including an instant testing option which will provide you with same day answers.

How is my sample taken?

A HIV test requires a small sample of blood.

Regardless of which turnaround you choose, the method remains the same. Using a lancet (a small needle), your finger will be pricked and a few drops of blood will be used as the sample.

When can I do my test after possibly being exposed to HIV?

HIV testing will not pick up an infection right away.

Antibody tests can be taken 4 weeks after exposure and provide highly accurate results. Whilst you wait for your results, you should refrain from sexual activity just in case you are HIV-positive. It can take up to 28 days for antibodies to start to form, so taking a test earlier may mean that it is too soon to detect these antibodies giving a false negative.

How will I receive my result?

All our sexual health results are shared with strictest confidence.

During your initial appointment, we will ask you your preferred method of communication of your results. We can provide them by email, text or a phone call. Whichever method you choose during your appointment will be the way we communicate your results.

Remove the worry and get tested for HIV. 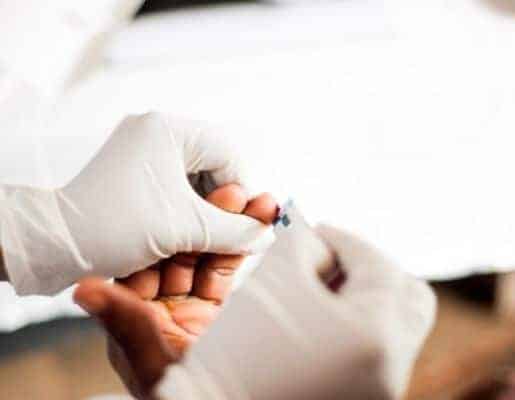 During your appointment our nurse will take the blood sample, explain the results and provide you with further information, if required.

Human Immunodeficiency Virus (HIV) is a virus which attacks and damages the cells in your immune system.

What are the symptoms of HIV?

Those who are infected are likely to show no to minimal symptoms for the first couple of years.

Within six weeks of being infected, flu-like symptoms are likely to appear alongside other symptoms such as chills, rash, night sweats, muscle aches, sore throat, fatigue and swollen lymph nodes. Symptoms progressively get worse with time and will develop into AIDS, the later stages of infection, serious and life threatening conditions. You can’t rely on symptoms to tell you if you have HIV, the only way to know is to get tested.

How does HIV affect the body?

HIV attacks a specific type of white blood cell in the immune system, known as the CD4 helper cell.

When HIV destroys this cell, it becomes harder for the body to fight off infections as it dramatically weakens the immune system. If left untreated, even minor infections such as colds, can become life threatening. Over time, HIV leads to a number of more serious, life-threatening conditions – collectively known as AIDS (Acquired Immuno Deficiency Syndrome).

Our sexual health services are discreet and confidential.
Depending on if you are currently experiencing symptoms or not, will depend if you appointment is with a nurse or a doctor.

If you are concerned that you have been exposed to HIV, give us a call immediately and we can advise you on the best course of action. A test is unlikely to detect HIV straight away. It is advised to wait 4 weeks after being exposed to the virus for accurate results. It can take up to 28 days for antibodies to start to form, so taking a test earlier may mean that it is too soon to detect these antibodies giving a false negative.

There is nothing you need to do to prepare for the HIV test specifically. However, you should abstain from sex until you have your test result back.

While there is no cure for HIV, there are very effective treatments that enable most people with the virus to live a long, healthy, normal life. HIV treatment is able to reduce viral load down to undetectable levels that the risk of passing the virus on to another person is zero.

Absolutely. Pregnant women are strongly encouraged to have an HIV test because HIV can be passed from a pregnant woman to her baby during pregnancy, birth or breastfeeding. Treatment during pregnancy greatly reduces the chances of passing HIV on to the baby.

If HIV is left completely untreated, it can affect the body’s immune system to the point that the body is much less able to protect itself from disease. This means that common viruses such as a common cold, can become potentially fatal. It is also common for cancers to form in a person with untreated HIV. The average time from infection to death in an untreated HIV case is usually 8-10 years.

Yes, they are different. HIV is the name for the actual virus which infects the body. Aids (acquired immune deficiency syndrome) is the name given to the potentially life threatening infections and illnesses that can occur when your immune system has been weakened by HIV. Untreated HIV will at some point develop into AIDS and in most causes prove fatal.

If you test positive, you will still be able to have a sex life. Your doctor will explain how HIV medication can reduce your viral load to drop your infectious levels. Once your viral load is undetectable the chances of passing on HIV to your sexual partner is virtually zero.

Your partner, if not already infected, may also be advised to use PrEP. The doctor will discuss these options with you.

Without HIV medication, the only way to guarantee you do not spread to the virus through sex is to abstain from it.

Life expectancy studies have shown that nowadays you can live to a normal life expectancy with the appropriate HIV medication. Without medication, HIV can still dramatically reduce your life.

We are conscientious that some of our patients or their close family members are deemed clinically vulnerable. Therefore, all our staff are fully vaccinated against Covid-19 for your protection and peace of mind.
> Read more articles