The incidence of Yellow Fever cases in Brazil has been increasing recently, with over 1000 cases of Yellow Fever in Brazil since July 2017. The cases were reported in Sao Paolo, Minas Gerais, Rio de Janeiro, Espiritu Santo and Distrito Federal.

In addition the World Health Organisation also advised travellers heading to the states of Parana, Santa Catarina and Rio Grande do Sul should receive the vaccination, irrespective of location.

What is Yellow Fever?

Yellow Fever is a flavirus found in the tropics of Africa and South America.

Monkeys are a natural carrier for the virus and it is spread between monkeys and humans via the bite of an aedes mosquito.

Illness: It causes an acute viral illness which has a 50% mortality rate.

Prevention: The yellow fever vaccination should be considered for travellers who are visiting a high risk area. A single vaccination affords life long protection. The vaccination many not be suitable for everyone, so ensure you seek a full travel consultation.

Map of current areas with a risk of Yellow Fever 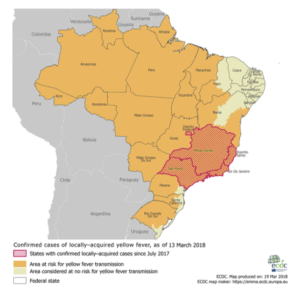 Statement on the Yellow Fever Vaccine